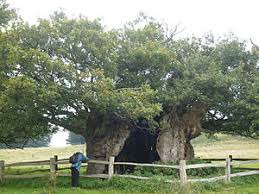 At one time enormous forests covered a major part of what we
now call Europe. These forests stretched across, and completely
dominated several, of what are today, European countries.
And the King of all of the trees of all of these forests was, and
still is, the Oak.

The Oak, whose wood is harder and more compact than that of
any other tree, can grow to mammoth heights; and its trunk can
expand to massive widths.

An Oak Tree can easily live in excess of 700 years; many have
lived for 1,000 years; it can also grow to more than ten stories
tall. The extremely deep roots of the Oak Tree compensate for
the immense weight of its heavy branches

The Oak Tree is struck by Lightning more than any other tree.
When struck by Lightning, that particular Oak was considered
to have received Enlightenment and Revelation from Divinity.
And it is why sacred rituals, rites, Ceremonies, and divinations
were carried out in Oak Groves. The strength and majesty of the
Oak is further realized in that after being struck by Lightning,
thereby absorbing Divine Illumination, it continues to grow.
The wood from Lightning-struck trees was especially preferred
for the making of staffs and wands.

Oak wood was used to fuel sacred and perpetual fires. Holy
Groves within Oak forests were used as places of worship and
Initiation. The Oak was the sacred tree of the Druids. Legend
has it that the Wizard Merlin used the uppermost branch of an
Oak Tree for his wand. Druids taught secret Lessons and
performed sacred Ceremonies under the outstretched branch
canopies of ancient Oak Trees.

It is because of these numerous distinct qualities that the regal
Oak Tree is a Symbol of Invincibility, Durability, Endurance,
Longevity, Enlightenment, Wisdom , Memory, Lore and Calm
Strength.

Because the wood of the Oak Tree is strong, compact and sturdy,
it was used in construction of fortifications, battleships and bridges.
Furniture made from Oak wood is extremely durable and can
last for centuries. Oak furniture also adds a feeling of warmth
and security to a home.

King Arthur's Round Table was reportedly made of Oak. Robin
Hood lived among the Oak Trees of Sherwood Forest. Jason's
ship the Argo is said to have been constructed from Oak Trees
grown in a sacred grove.

Oak roots, being embedded deep within the earth, Symbolize
steadfastness, strength and a solid foundation; important
qualifications for one's personal moral standards. Because of their
inherent strength, Oak roots were often used in the manufacturing
of handles. Oak roots were also considered to be magically potent.

The far-spreading horizontal branches of the Oak Tree provided
a protective and peaceful canopy under which important and
solemn Ceremonies were carried out.

Councils were convened, treaties were signed, conflicts were
resolved, marriage ceremonies were performed, and proclamations
were announced under the sheltering branches of an ancient Oak Tree
to signify that these rituals were protected and blessed by the strength,
longevity and durability of the mighty Oak. In short, the ancient Oak
was the central stabilizing location of rule and order.

Cutting down the Great Oak of another was considered an act of war,
conflict, collapse, treachery and chaos.

A multitude of cities, states and countries have adopted the Oak
Tree as their Symbol. Oak leaves are utilized in military insignias.
The Oak Tree is the Symbol of choice on many Coats of Arms.

Bark: Decoctions, elixirs and teas made from Oak bark are used
to combat diarrhea, dysentery and headaches. Salves made from
Oak bark are utilized externally to treat hemorrhoids, inflamed
gums, wounds and eczema. A decoction of acorns and Oak bark
was considered to be an excellent antidote for poisoning. Oak bark
is used to create dyes and is also used in the tanning of leather.

Hollows: Some ancient Oaks grew so wide that their Hollows
were able to provide shelter from not only the elements but also
protection from enemies. These Hollows also served as
congregating places for secret meetings. Oak Tree Hollows are
also perceived as doorways to other realms. Anyone who has
ever stood, or sat, within the Hollow of an Oak Tree has probably
felt the protective, nurturing and magical feeling it induces. It is
suggested to either sit with your back against an Oak Tree, or
sit within its Hollow, when we are in need of strength, calming
or enlightenment.

Druids: Although the word "Druid" means "Men of High
Knowledge", or "Master Teacher", it is because they used the
Oak Tree as their sacred Symbol that they were referred to as
"Men of the Oak".

Acorns: Acorns have always been used as a food staple. Acorns
can be roasted and eaten as food; they can also be ground and
used for making bread and as a substitute for coffee. Because
Acorns are a product of the powerfully Symbolic Oak Tree, they
were worn and carried for "good luck". And, for the same reason,
eating Acorns was thought to provide strength and Enlightenment.

Woodland animals store Acorns for their winter food. Any uneaten
Acorns lying on the ground can sprout roots and become the
next saplings. However, only a very small percentage of Acorns
become Oak Trees.

The entire potential of the mighty Oak Tree is contained within
a single Acorn.

Mistletoe: Mistletoe does not grow on the ground. It is borne by
the birds of the air. And, as birds have always been the Symbol
of Spirit, Mistletoe is considered a spiritual gift from heaven.

It is very rare to find Mistletoe on an Oak Tree. But, when this
"gift from heaven" is found growing on the Oak Tree, which is
itself a Symbol of Wisdom and Enlightenment, it is considered
to be a very sacred event; a gift from Divinity. And being a gift
from Divinity, it was only removed from the Oak Tree by way of
a very solemn and meticulous Ceremony.

The Druids removed the Mistletoe from the Oak Tree in the
following manner: As Mistletoe was considered a sacred gift
from Divinity, it was considered sacrilegious to either hack or
cut it carelessly from the Oak. During a sacred Ceremony, a
Druid dressed in all-white would slice the Mistletoe from the
Oak with a Golden sickle. The Mistletoe was then caught in a
white sheet and never allowed to touch the ground. Mistletoe,
in addition to being a fertility gift from Divinity, was also
considered to be an antidote for all poisons.

Comments and Emails: I welcome comments and emails from
people with similar thoughts and feelings. My Email address is
located in the upper-left area of this page. Comments can be
posted by using the "Comment" link located below each article.
Also: If you found value in this article please feel free to forward
it to other like-minded individuals, organizations and sites.

Disclaimer: None of my articles should be considered to be
either advice or expertise. They are simply personal opinions
and no more. Everyone is encouraged to seek competent
advice from a licensed, registered, or certified professional
should such advice or service be required.

I welcome comments from like-minded individuals.
Your thoughts and feelings are much appreciated.
All comments are moderated. Any comments which
are confrontational, vulgar or otherwise dis-
harmonious with the nature of this site will be
deleted at the sole discretion of the author.
Thank you for visiting my blog and for taking the
time to post your comment!